Painel “Autonomous Robots: from design to navigation and interaction” 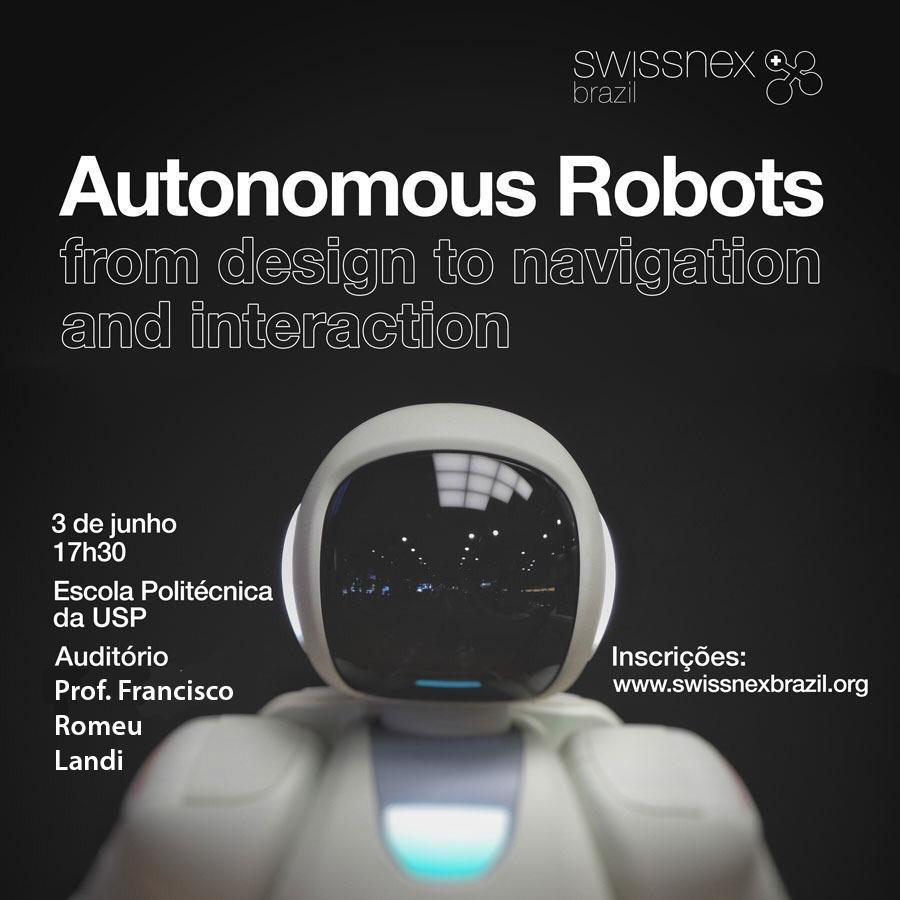 The event will be held in English, with no translation.

Ph.D. Roland Siegwart is full Professor of Autonomous Systems at ETH Zurich since July 2006 and Founding Co-Director of the Wyss Zurich Foundation. From January 2010 to December 2014, he took office as Vice President Research and Corporate Relations in the ETH Executive Board. He is a member of the board of directors of various companies, including Komax and NZZ. He received his Diploma in Mechanical Engineering in 1983 and his Doctoral Degree in 1989 from ETH Zurich. He spent ten years as a professor at EPFL Lausanne (1996-2006) and held visiting positions at Stanford University and NASA Ames. He is and was the coordinator of multiple European projects and co-founder of half a dozen spin-off companies. He is IEEE Fellow, recipient of the IEEE RAS Inaba Technical Award and officer of the International Federation of Robotics Research (IFRR). He is in the editorial board of multiple journals in robotics and was a general chair of several conferences in robotics including IROS 2002, AIM 2007, FSR 2007 and ISRR 2009. Roland Siegwart’s research interests lie in the design and control of robot systems operating in complex and highly dynamical environments. His primary goal is to find new ways to deal with uncertainties and enable the design of highly interactive and adaptive autonomous robots. Prominent application examples are personal and service robots, autonomous micro-aircrafts, walking, and swimming robots and driver assistant systems. Furthermore, he is an active promoter of innovation and entrepreneurship in Switzerland.

Ph.D. Paulo Eigi Miyagi is a full Professor of Engineering from Polytechnic School of the University of São Paulo (USP). He holds a Master’s and Ph.D. in Control Engineering, both from Tokyo Institute of Technology in Japan. He is a“Livre-Docente” in the area of automation and robotics. He is currently Associate Editor of the “Journal of Control, Automation, and Electrical Systems,” “International Journal of Mechatronics and Applied Mechanics,” and a member of the Editorial Board of the “Journal of the Brazilian Society of Mechanical Sciences and Engineering.” He works in the area of Mechatronics Engineering, with emphasis on systems automation and has carried out R&D in industrial automation, robot programming and control systems design.

Ph.D. Daniel Consalter is CTO at Fine Instrument Technology (FIT). He holds a Ph.D. in Applied Physics from the Institute of Physics of São Carlos at the University of São Paulo (IFSC – USP) in the field of nuclear magnetic resonance (NMR) instrumentation. He completed his Bachelor’s and Master’s degree in Physics from the Gleb Wathghin Institute of Physics at the State University of Campinas (IFGW – UNICAMP) where he worked on the Auger Project with instrumentation. Dr. Consalter is an entrepreneur focused on innovation and works in the development of analytical equipment and solutions in process and quality control in agro, oils and gas, oil and fats, citrus, food, soils, polymers and others in partnership with the University of São Paulo (USP), the Brazilian Company for Agricultural Research (EMBRAPA) and Brazilian Center for Physics Research (CBPF).